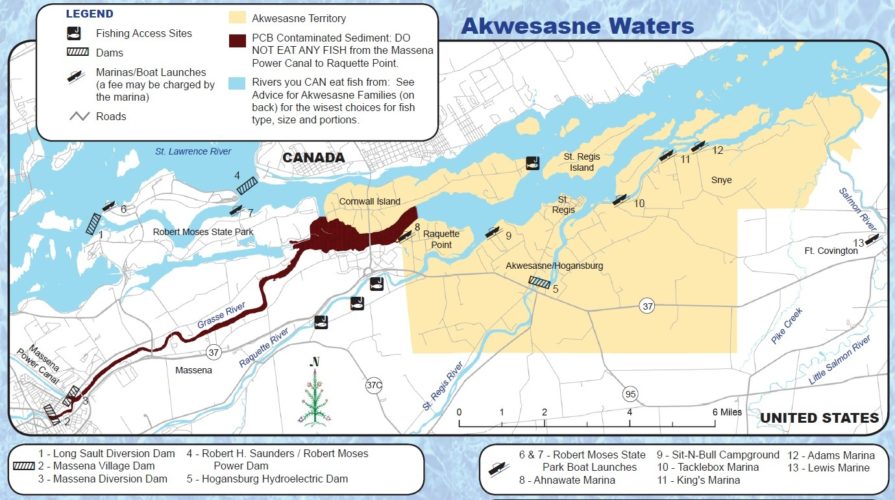 AKWESASNE — The Saint Regis Mohawk Tribe’s (SRMT) Environment Division issued the following information in response to an updated fish consumption advisory released on Enniskó:wa/March 20, 2019 by the New York State Department of Health. The Tribe’s Environment Division welcomes the state’s updated advisory, as it reaffirms the Tribe’s recommended guidelines provided in Kentenhkó:wa/November 2013 due to elevated levels of polychlorinated biphenyls (PCBs) and Mercury in the St. Lawrence River.

“The latest information issued by the New York State Health Department is recognition of the Saint Regis Mohawk Tribe’s efforts to protect community health,” stated SRMT Environment Division Director Tony David. David added, “Fish are an important food source for Akwesasne residents; however, restrictions on consumption of locally caught fish are still necessary due to the lasting impacts of local pollution. I thank the Department of Health and other state agencies for echoing our recommendations in a spirit of partnership that protects public health, as our waterways recover.”

The State’s old advice covered the lower 7 miles of the Grasse River and Turtle Cove, located to the east of the South Channel Bridge at the Franklin and St. Lawrence County line on the St. Lawrence River. The new advisory closes the gap from the mouth of the Grasse River and extends downstream to the north end of Raquette Point (Navigation Light Number 11). The State’s advisory was updated on March 20th and now mirrors tribal consumption guidelines.

Within the above-mentioned area, both fish consumption advisories now restrict the eating of any fish species due to the presence of contaminants. Less restrictive fish consumption advice applies for other areas of the St. Lawrence River located in the Akwesasne Territory.